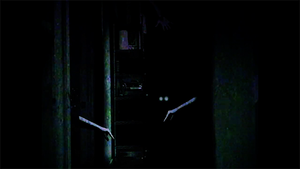 It starts out with a text that they had returned to the house where the original haunting back in 2005 took place, and that they had found a camera in the hallway which had contained more footage of more haunting taking place there. Pretty soon you hear similar high pitched breathing and moaning noises like the original commercial. Then you see hands, faces, fingers, and even glowing eyes in the same room that the original haunting events had took place. This time the whole footage is in night vision. Then eventually we hear high pitched whispering as the hands, faces, fingers, and eyes all disappear from the footage. Then the video ends with the narrator's text-form disapproval of all of the events happening when they went back to the house.