Can you Spot it? 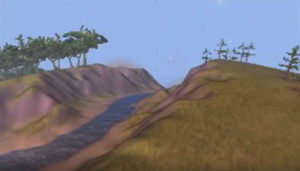 Can you Spot it? is a screamer video made by user George Muller. a.k.a TheMan5 on this wiki. It has been uploaded on May 11, 2018, and had currently gotten 33 views since the video's upload.

At the start of the video, a blue screen with some yellow colored text shows up. The text says: "Can you Spot something happening in this natural scenery?" "I hope you find out!"

It then shows a footage from the game Spore: Galactic Adventures. A long river with some trees in the background is seen. The camera slowly moves around the scenery, making the viewer concentrate to see if he can spot something happening. The camera slowly moves around, until at 1:14, when suddenly a mutant creature, (known as Lepon, from My Captain's Story a series by the same creator) pops out, with the same scream from What's Wrong?. It then shows the same blue screen with some new yellow text appearing and saying:"Ha Ha Ha Ha!, I Got you!, I Hope you liked this vid!, Like Comment and Subscribe!" along with a sound effect of a man laughing playing in the background.