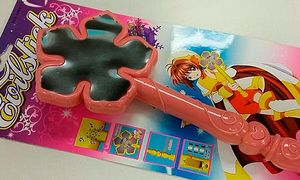 The "vampire wrist slit" image is currently infamous used for appearing in the Evil Stick toy.

Butcher Ludwig is a shock site and it is entering the website, it shows full of photoshopped themed makeup gallery with gore, such as a vampire-like woman sliting her wrists quite graphically.

The same vampire image is best known for showing up on a toy called the Evil Stick. One of many images featured there is that one.

NOTE: Despite all of being makeup from photoshop and special effects, the following website contains extremely graphic images!