An unedited clip from spongebob 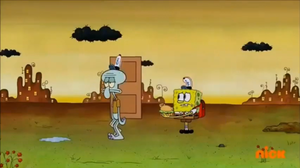 An unedited clip from spongebob is a screamer video created by Redlark.

It features a clip from the SpongeBob SquarePants episode "Spongebob in Randomland", which as the title suggests, is unedited until the very end. In the original episode, Squidward opens a bunch of doors which reveal a distorted version of himself - but when he opens the third door, however, it shows his room for half a second where a Squidward face with red eyes and black liquid pooring out flashing with a distorted sound effect - a reference to the infamous creepypasta "Squidward's Suicide". In the video, which is indeed edited, the sound is amplified greatly and a filter is applied to try and shock a viewer who believes the video truely is unedited. It was released on September 22nd 2019.

Sqiudward suicide: You mind if I just... Roar