A Day In The Life Of The Steel Legion 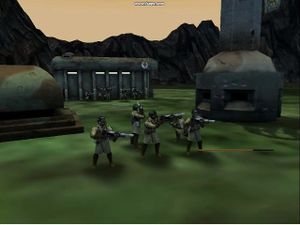 A screenshot of the video

A Day In The Life Of The Steel Legion is a video that was uploaded to YouTube in November 2006 by VenerableDread.

A good chunk of this video is footage of the game Dawn Of War intercut with text stating a possible story for the scenarios. All seems fine and good until the ending, where text appears stating "THE END! Now go home, or..." on a yellow background. After this, an image of a giant spider in a room (same spider from The Saddam Hussein Execution from the same creator) appears flashing with the same scream as in the K-fee commercials. The video ends with "Now it's THE END. Happy now?"