, developed by Berick on March 25, 2015, this game shares the same gameplay taken, but the ghosts have different abilities added to them, whether they can walk through, teleport, higher movement speed and more. 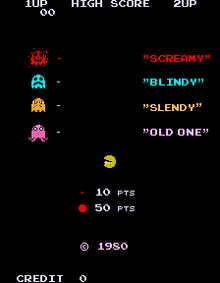 The objective is to collect and eat all of the dots arranged in the enclosed maze while avoiding 4 colored-ghost trying to chase the player, you are able to control Pacman by utilizing the ASWD keys in order to collect them, when all the dots are eaten will be automatically advanced to the next level which often increases more difficulty as the player keep progressing within the game, if the player makes a contact with a ghost, the Pacman will lose a life, when all the 3 lives are lost, will lead back to the start menu where the player has to start over.

Each of them has a different Artificial Intelligence (A.I) attempting to chase Pacman within the maze, Blinky and Inky have different movement speed which is higher than Pacman, and Clyde will try to position himself in front of Pacman perspective in order to trap him and Pinky has a special ability to walk through them without touching or hitting the walls, although her speed movement is notably slower than Pacman and can be seen clearly.

Additionally, the ghost will remain invisible and it's impossible to pass through them without knowing where the ghost was going, there are power-pellets placed in different locations (they are mostly positioned in the corners), which makes the ghost invisible and allowing them to get eaten, furthermore, The ghost will be visible if they are viewed on Pacman perspective as well as the dots placed, there is a chance getting a screamer by making a contact with Blinky, will display a close-up picture of Blinky with magma eyes and mouth followed by the loud scream, they will often restart when its occurred on Level 5.

after finishing level 5, this one will be the last level, the maze only consisting of a gray version of Pacman attempting to chase the player, the movement speed is 2x higher than Pacman, so it will be impossible to complete the level, when you make a contact with the enemy, will display an animated corrupted screen accompanied by a loud noise (possibly a reference to Level 256), after the corrupted screen ends, you're now casually playing a Ghost in the first-person perspective, when you make a contact with Pacman, will automatically restart the game subsequently.