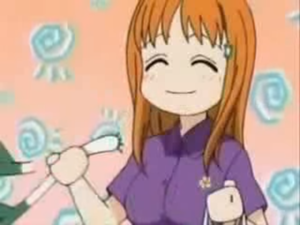 Don't let her spin for any longer than a minute.

Loituma (also known as Loituma Scary Pop-Up) is a screamer video uploaded to YouTube by p4ttheb4ker on February 2, 2008.

The video is an edited version of the leekspin meme, which consists of the GIF of Orihime Inoue from the Japanese anime/manga Bleach spinning a leek with the music Ievan Polkka by Loituma. At 1:08, a picture of Regan MacNeil from The Exorcist with no eyes pops up with a high-pitched female scream, ending the video.