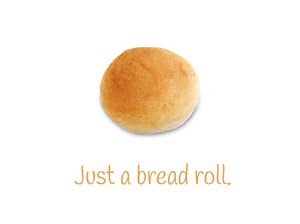 It's just a bread roll. Nothing more, nothing less.

Just a bread roll. is a screamer game made by MeMakingProjects on May 25th, 2019.

The game starts with an image of a bread roll; under the image, there is text displaying, "Just a bread roll." The song "Pixel Peeker Polka" by Kevin MacLeod plays. after about 40 seconds, the song's pitch randomly changes. five seconds later, the image turns red, and an extremely loud scream plays. after that, a fake Blue Screen of Death appears.

NOTE: The following animation does not contain a screamer.

If that's not a bread roll, then what is it?