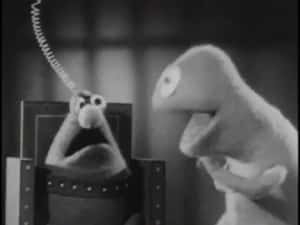 The video starts up by normally showing a commercial of Jim Henson's Wilkins Coffee Commercials, which was aired on television in 1957, and stop in 1961, But when Wilkins pulls the lever. a picture of Sinistar from the arcade game appears with the same scream from The Maze, the screamer is now lost, deleted, you can't find any archives on Wayback Machine