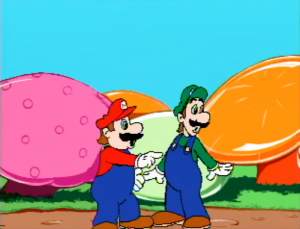 Hotel Mario Intro was a screamer video that was uploaded to YouTube by Unknown creator, the video starts with the Hotel Mario Intro. The video may seem normal at first, however, right after Mario says "Luigi, Look!", a picture of Pazuzu appears along with the same scream from What's Wrong? Slowed down, then cuts to another picture of Kikia appears along with a different scream. The video was deleted on YouTube.

Lyrics: (evil laugh) Nice of the princess to invite us over for a picnic, eh Luigi? I hope she made lotsa spaghetti! Luigi, look! (scream numero uno) (scream numero dos)

I've always wanted to see this one. The idea of Mario telling Luigi to look at a screamer is maddeningly funny.