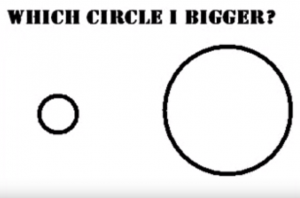 The video starts off with 2 circles one big and small, the video asks you Which circle is bigger while luring the viewer to look closely into the picture. after 20 seconds later, a zombie face pops up with a short scream.