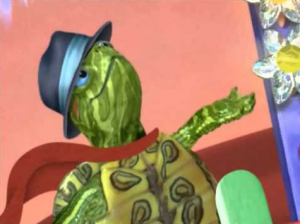 This video has gotten a lot of hate, since it turns out that most of the viewers were parents with their kids, and kids which showed the video to young familiars, either to show them the video to entertain the younger ones or to show the kids what they used to watch, which can be seen in the comment section of the video. The video itself has been Age-restricted and it is based on community guidelines for unknown reason, but recently the video has now been taken down due to the video violating their Community Guidelines.

Not nice to scare people!