Difference between revisions of "Squirrel in a mouse trap" 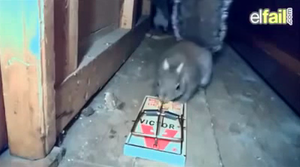 The squirrel about to set off the trap

Squirrel in a mouse trap is a screamer video uploaded by ishaan sharma on June 19, 2015.

The video shows some live footage of a squirrel cautiously approaching and investigating a spring-loaded mousetrap. Eventually, the squirrel tries to eat the piece of cheese and consequently sets off the mousetrap, which snaps and flips away from the rodent. The squirrel then reels back and cowers in one spot for a while. It then stretches its head with a leery look as it appears to have noticed the camera, and suddenly leaps towards the screen. At this point, a picture of Amy Peterson from Fright Night appears with a scream and zooms in and out, much like Zoeken.

The original footage of the squirrel was uploaded to YouTube as Squirrel Owned By Rat Trap! by goodvidsable on January 11, 2012. It starts with some introductory text, saying that the creator of the video was dealing with a rodent problem in their bedroom and therefore eventually bought a rattrap to deal with the problem. However, the trap ended up being mysteriously sprung with no catch, so the creator decided to install a video camera in the closet to see what's going on.

The footage itself is the same as the one in the screamer, but when the squirrel jumps towards the screen at the end, some metal music plays and a screen appears saying “Owned”, followed by “They Keep Coming Back...”. Even though it contains no scream, it can still be a bit startling if the viewer doesn't expect it.

There is also a six second Vine video featuring the footage of the squirrel setting off the trap with an excerpt of the What's This? song from Nightmare Before Christmas in the background, as a joke.

Curiously, the screamer version of this video seems to be the only version which features the elfail.com watermark in the top right, making it easy to tell apart from the legitimate uploads.

This already is a screamer even without the jumpscare.

sandy needs to write a check (the caption,)