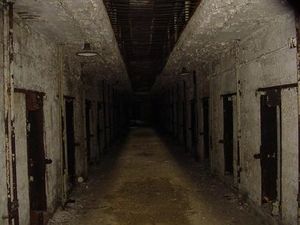 SCP-450 is a unique screamer video that despite its name, it has nothing to do with the SCP Foundation's website or information apart from the hallway picture used in the video. The original video was uploaded on December 4, 2010 by Andreyj857, the creator of ВИD of Doom. It had over 140,000 views as of November 2014. The video is now private, but there are still copies of it.

After 50 seconds, a picture of an adorable kitten accompanied by a meow pops up and afterwards the credits start. The following line is shown: "THANKS FOR WATCHING! prepare to shit brix >;3". after this line appears from the bottom, a flurry of well-known screamer faces, like Regan MacNeil, El Ayuwoki, the Tic-Tac-Toe zombie, the Sajjad Ali banshee, and Pazuzu appear and zoom to the viewer in a fast slideshow fashion with accompanying screams. The screen then becomes black.

One second later, the face of Jeff the Killer comes up while the song I Shot The Sheriff by Bob Marley plays. Again, after that, Regan MacNeil pops up again with the same scream used in The Maze while the face zooms up and seemingly "headbutts" the screen.

Dude it also had other faces

Fun fact (probably not): in the screamer part of this video, the sound from Candle Cove at 14 seconds (in candle cove played with other screamer sound effects.

i wanted to know where that picture came from