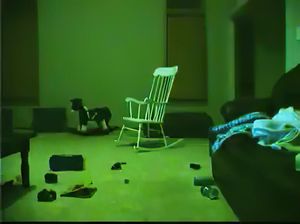 The video starts off with text saying to do some stuff specific to your YouTube screen. The text is on a black screen and it is bloodshot red. The video then cuts to a dark room with a rocking chair in the middle. There is a Chevy commercial playing very quietly in the background. There is a blanket that somewhat moves to the far right. But near the end, the rocking chair starts moving; right after, a girl with Regan MacNeil's face pops up in front of the rocking chair and crawls up to the camera screaming with her mouth closed. After around 5 seconds, the video changes to a white text reading "www.szworld.net." then the video ends.


An alternative version exists which replaces Regan's possessed face with a female with black eyes and mouth.

I wonder if he kept that rocking chair

I hated the fact that she ran up to the camera

My uncle pranked me back in the day with this.

a chevy commercial?? didn't notice that all these years lol

So which version came first? The Regan McNeil versions or The Ring girl?

you startled the witch....

i kinda liked this

It was real up until some girl came running up

YOU WOKE UP THE WITCH

Why is goastee suddenly on heree??

Fishing line for everything in the scene, and tweened animation for the Exorcist girl picture and cutting straight to the girl crawling up and all.
Permalink
You are ignoring the author of this comment
Show comment | Manage ignore list

This video scared me SO BAD when I was a kid

it makes me wanna huddle in a corner

which version came first? the regan macneil version or the one of samara?

That scream aint loud, but the jumpscare always gets me.

I cried when i saw this as a kid