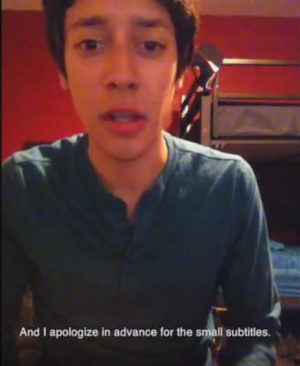 Eric Medina speaking to the viewer.

Experimenting with Sound is a screamer video uploaded to YouTube by user Eric Medina on November 3rd, 2013.

The video starts with Eric Medina, the creator of the video, and owner of the channel, speaking to the viewer: "Hey everybody. Umm..Thank you for watching this film." "And i apologize in advance for the small subtitles." "If you have to make it full screen, then do it" "If you have to move a little closer ,do that, too im sorry. I really apologize for that." "I've been having a lot of difficulites with the text" After he will said those last words, a picture of Regan MacNeil from The Exorcist pops up along with a same scream sound effect used from K-fee commercials, but also in low pitched.