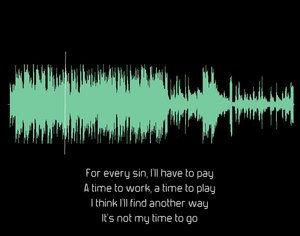 Backwards Music is Flash screamer animation made by Zephret, it's similar to Jingle Bells Reversed, from the creator of My Grandmother's Murder.

The animation starts in a stating text "When music is played backwards... Messages can be heard... Are these diliberate? ...or something more sinister? You decide for yourself" in a passage where the release of James Bond film Die Another Day. when the film gets highly popular with pictures of many great actors and few cameos.

From here, Madonna provided the title track from this movie and it was a hit to it's own. when start playing by an extract from this song with lyrics, the same extract is played in reversed. however, then a quarter will happen, a lizard boy appears and fast zooms in with a high-pitched scream, Then a text stating "Gullible, aren't you?"

I remember the jingle bells one more